Proverbs 19 has 5 verses that directly relate to lying and it got me thinking.  On the TV show House, the lead character’s main line was, “Everybody lies.”  He said it so many times that it began to sound like fact.  It seemed like every one does, in fact, lie.  (Although we know that if anyone is in Christ, he is a new creation, and the old rules don’t have to apply)

I’m so glad that it is impossible for our God to lie.  It’s important to note that whatever God speaks actually happens.  When He said, “Let there be light,” there was light.  When He called it Day, it became Day.

That means that when God said He does not forsake His inheritance, it is fact.  (Isaiah 94:14)  And those who believe in Him ARE His inheritance.  (Gal. 3:26)  It means that He actually loved us so much that He gave His only begotten Son, that whoever believes in Him should not perish but have everlasting life.  (Jo. 3:16)

Did you skim over that last verse?  Jesus said those words.  Remember that they’re fact.  When Jesus said, “Lazarus, come forth!” Lazarus came forth.  (Jo. 11:43)

It also means that He will come again, just as He said He would.  (Rev. 21-22)  Until He returns, it means we can rely on this verse to guide us as we do His work here on earth:  “Most assuredly, I say to you, he who believes in Me, the works that I do he will do also; and greater works than these he will do, because I go to My Father.  And whatever you ask in My name, that I will do, that the Father may be glorified in the Son.”  (Jo. 12:12-13)

Satan is the one who lies.  He is the father of lies and that proof is also all around us.  Anytime we begin to believe something contrary to the Word of God, we can remember that if God said it, it is true.  It is impossible for God to lie!  Now, that is encouraging.  🙂

Pr. 14:7:  “Go from the presence of a foolish man, when you do not perceive in him the lips of knowledge.”

This verse could be talking about a lot of things.

Turn off that song when you realize the lyrics are giving you knowledge that is against what the Word says is beautiful, true, and for eternal life. 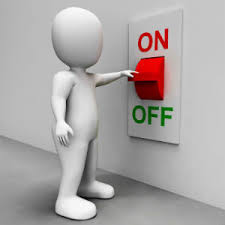 Turn off that movie or that tv show when you realize that you’re learning to become desensitized to sin and neglectful of your real purpose on this earth.

Turn off that podcast when it is teaching you something other than reliance on the Lord as your Source and your Strength.

Turn off the computer or your phone when you find yourself reading or looking at things that are draining your devotion to, or your knowledge and understanding of the Holy One.

Turn off that relationship when you know it’s not of God.

Turn off your ears when hear someone preaching a different God or Jesus than the One of the Bible.

How can we know when it’s time to ‘turn it off’?  We must know the Word.  When we know the Word, we understand more easily what things are true, noble, just, pure, lovely, of good report, virtuous, and praiseworthy.  (Ph. 4:8)

Satan tries to distract us in the flesh, but God’s knowledge gives us life.

Jesus is the One who said, “It is the Spirit who gives life; the flesh profits nothing.  The words that I speak to you are spirit, and they are LIFE!”  (John 6:63…exclamation mark and capitalization added by me)

Pr. 14:7:  “Go from the presence of a foolish man, when you do not perceive in him the lips of knowledge.”

Does anyone besides me find it nearly impossible to watch movies and tv shows these days?  We’ve never had cable, but we do have a subscription to a streaming company where we can get certain shows.  Besides a series my husband I watch together, I only try to watch this a few times a month.  Honestly, I’m not even sure why I continue to try at all.  Yesterday I tried to find a “feel-good” movie and within the first 30 seconds of the PG-13 movie I had chosen, there were 3 curse words.  Really?  It’s so frustrating.

I could have kept watching.  It’s just the way things are now, right?  But I turned it off.  Why?  I could tell there was nothing good that show could offer me.  If the writers aren’t even able to fill the first 30 seconds of a script with conversation that doesn’t include expletives, then they likely have nothing to say that I need to hear.  There are certainly much more interesting and creative ways to draw someone into a movie.  A God who created things as interesting as giraffes, rainbows, and Venus certainly made our brains more creative than curse words.

The same applies with co-workers, friends, family and church members, etc.  If we find that our conversations are being filled with foolishness…things that not only do not point to God or His will, but point away from it, then we need to ask ourselves why we are still in the conversation.  There are times when we need to speak up, change the subject, or simply walk away.  Not every conversation is worth joining or worth our listening ear.

When I cannot find a movie worthy of my attention, I usually turn on my praise and worship songs.  That’s probably where I should have turned to begin with.  When we cannot find a conversation worthy of our attention, we can turn to find one that is, turn to prayer or praise, or simply find quietness where God can speak to us individually.  My advice:  surround yourself with others who believe in the King of Kings and the Lord of Lords, just as you do.  Attend a church that speaks life, truth, and encouragement.  Ask the Lord to show you someone who needs an encouraging word.

If we are hearing or talking about the blood and the power of Jesus, then we’re in the presence of something that’s not only “feel-good,” but will guide us towards the Savior who will be coming back for us all.  “Oh, be careful little ears what you hear.”  The negative things affect us, whether we want to believe it or not.  If we are setting our minds on things above, we will continue in knowledge and be in a position to offer the same to others around us.